Turkish
You are here: Home / Walking, Bicycling and Running Near Pessel

Without doubt Walking, Cycling and Running are popular activities for locals and those on vacation in France particularly in the forrests in this area.

There are many routes which are marked clearly on the tracks by wooden posts with Yellow caps and additionally indicate the direction you should turn.
These posts and the markings on them are set up for moving in a clockwise direction, as advised one day, by workmen repairing them.

There a number of walking routes around Urval, one of which passes through Pessel alongside the Gites. See photo of routes below.

This is from the board alongside the Mairie. Different paper versions are available from the Tourist Offices but there may be a small charge. From those we have seen they are not as good as the detail given in this Photo.

There are also apps available showing these routes, however,  there can be gaps in the detailed routes.

It must be noted that these tracks are unpaved for most of their length and to cycle on these, a Mountain Bike is essential.

Cycling on the paved roads is tempered by the elevation changes and the following are timings taken by a couple in their 30’s.

The differential times reflect the changes in elevation along the route to/from Pessel.

This photograph is of the information board next to Urval Mairie.

It covers the large area centred around Cadouin and Le Buisson and includes an enlarged map of the Urval area. 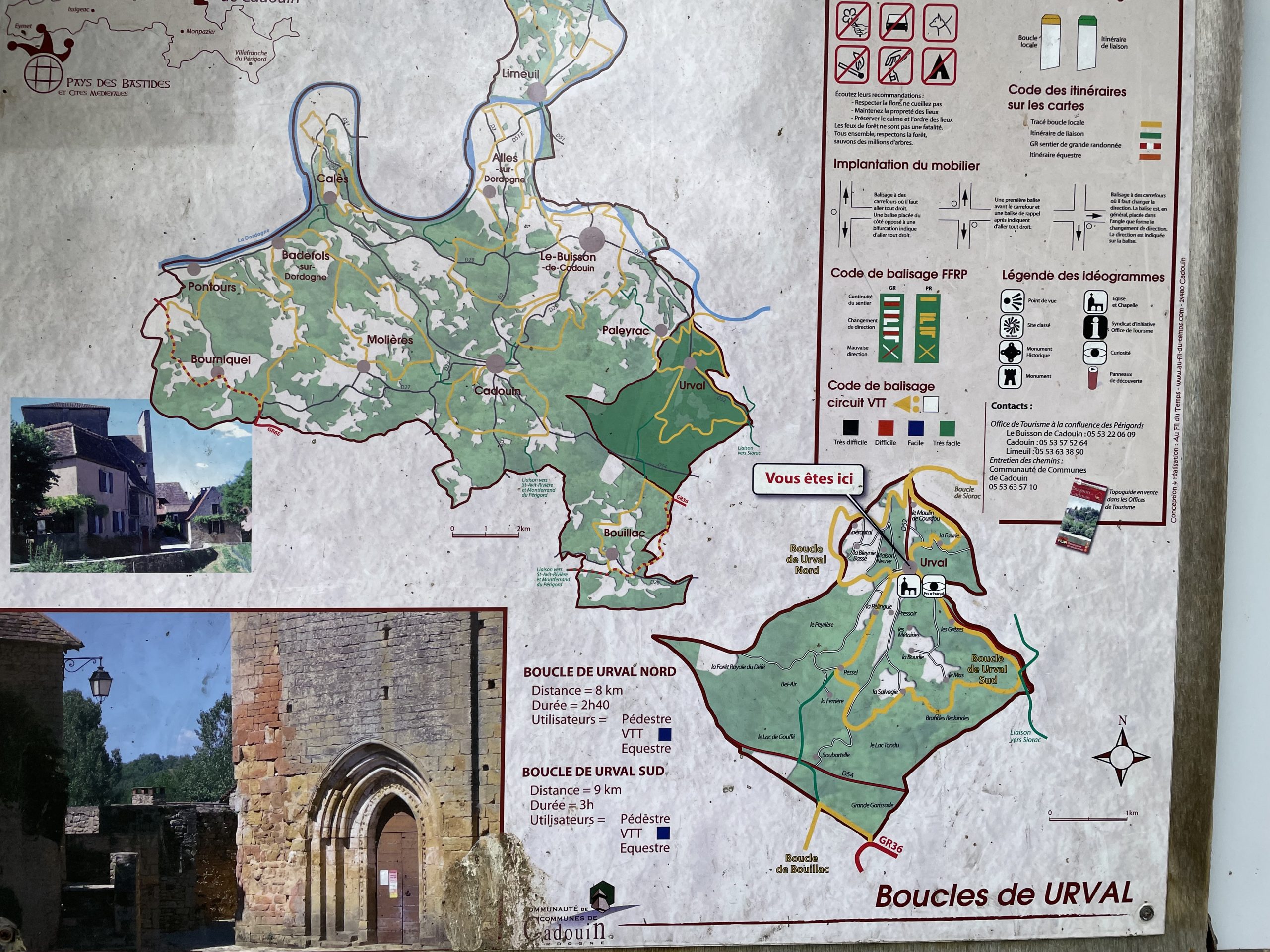 visorando from Apple appstore devices is very good at showing detailed routes and the route which passes through Pessel.

It is one of the best we have found for its completeness, clarity and accuracy.

Below is a different map of the route which passes through Pessel, which is on the left of the image, Urval is at the top of the image.

Maps are also available from the local Tourist Offices, including Soirac, which are available for purchase. 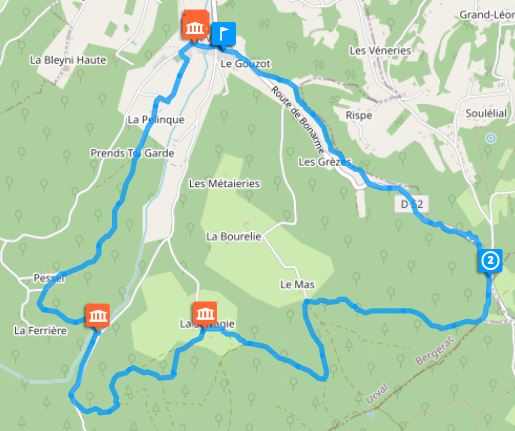 Owners Direct
***** Excellent
Beautiful property in a tranquil location
This was my first visit to the Dordogne. The property was well equipped and the owners friendly and helpful.
The beds were comfortable and clean with lovely fresh bedding. The setting was quite beautiful and peaceful. It was a great place to relax and reflect, away from the hustle and bustle of my busy life.
It is situated just a mile or so away from the delightful village of Urval and only a short drive to a number of picturesque towns which were a joy to visit. I would highly recommend this property as a great base from which to explore and get to know one of the most beautiful parts of France
6/11/2016 at 8:00 AM

VRBO
5/5
The perfect holiday spot
This holiday home set in a beautiful, peaceful hilly location, surrounded by woodland provided the ideal spot for exploring the Dordogne valley, with its many historic and prehistoric sites. We felt at home from the moment we arrived, with a bottle of wine, and walnuts from the garden as a lovely welcome. Owners Christine and Alan were very friendly and knowledgeable about the local area, always quick to answer any queries, and happy to make recommendations, and were genuinely interested in helping to ensure our stay was as good as it could be, but without being intrusive. The property's rooms were spacious and comfortable, with extensive grounds for the children to play in. The warm evenings with views of the starry night sky were unforgettable. All in all, we had a wonderful 2-week holiday at Pessel, and would thoroughly recommend this holiday cottage.

The owners, Alan and Christine, were very welcoming on arrival setting the tone for our stay. The property was spotlessly clean, and thoughtful details included such as wine, milk, butter, bread and orange juice, tea and coffee, and olive oil, garlic and herbs for cooking. Pessel is very peaceful and is surrounded by beautiful woodland, so perfect for relaxing and enjoying nature. We didn’t need to venture far from the gite to see pine martins, deer, hoopoe, black kites, fire crests, short toed eagles and too many species of butterfly to list.
Alan and Christine were very helpful and charming and I wouldn’t hestitate to recommend Pessel to any nature lovers wanting to get away from it all.

Beautiful authentic cottage in a fine location
We had a wonderful holiday in Grand Pessel. The welcome by Alan and Christine is very warm. They are very nice hosts. They are easily accessible during the stay.

The cottage looks beautiful and is fully furnished. The walls are very thick, which keeps the temperature nice and cool inside. There was even a “welcome pack” on arrival with basic necessities (milk, bread, eggs, wine, …). The very modern walk-in shower is wonderful and the beds sleep well. Bedrooms are upstairs and reached by a staircase with wooden steps. Stairs are fine if you have good mobility (better not walk in socks) but can be difficult for younger children who are not yet so firm on their feet.

The location of Domaine de Pessel is wonderfully quiet and there is plenty of space around the cottage. The deer sometimes even walk in the garden.

There are many nice villages in the immediate vicinity. We have never actually driven more than 45 minutes to see anything. This was especially appreciated by the boys (13 and 15). At about 15 minutes drive are 2 beautiful abbeys that fall under Unesco World Heritage. These are definitely worth it. The villages are all cozy with nice terraces and restaurants. Many villages date from the Middle Ages with nice castles and beautiful views of the Dordogne.

Canoeing on the river is very close by and the aquarium in Le Bugue is a fun attraction, especially with children. We were in Pessel just before the Perseids swarm was closest to Earth. Because the area has little light pollution, we regularly enjoyed the sunbeds in the garden to watch (shooting) stars in the evening / night.